The Journey West – Mountain of Fiery

Percussion by:
Cheryl Ong (from A Bigger Bang)

Performed in Mandarin with no English surtitles
50 minutes, no intermission
Suitable for ages 6 and up 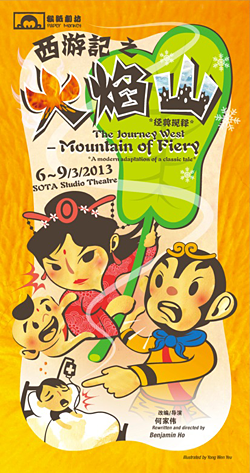 A modern adaptation of a classic tale

Princess Tie Shan was not only well-known for her fiery temper, but also having to own a magic fan which could put out any disaster. Wukong the Monkey King, approached her to borrow the fan to put out a fire so that the entourage could continue on their Journey to the West. However, the Princess Tie Shan bears a deep grudge with Wukong who had caused her to be separated from her son, and refuses his request.

In a separate story, Mrs Sun receives good news from the hospital as they have found a suitable donor who could potentially save her child’s life from a terminal illness. However, the donor turned out to be Teacher Hong, who had a deep hatred for Mrs Sun for an incident that happened in the past. Will Teacher Hong be able to let go of the past, and like Princess Tie Shan, to give up the “magic fan”?

A modern adaptation of a classic tale, this enchanting, meaningful tale comes alive through drama and specially handcrafted puppets. Not to be missed!

Past School Tour : The Three Bullies