Past School Tour : The Three Bullies

Contact Us
For more information, kindly email us at admin@papermonkey.com.sg.

Suitable for children aged 5 and above

A long time ago, there was a small village constantly harassed by a tyrant named Zhou Chu. He had the arrogance and strength of a dragon, a howl louder than a lion, and was as hot-headed and impatient as a tiger. Everyone in the village was afraid of him.

One day, three big bullies came upon the village. There was a ferocious tiger lurking in the hills, a vicious dragon raging havoc in the seas, but the third bully was the strongest of them all. The tyrant Zhou Chu boasted to the village that he will overcome the crisis. Will he be able to defeat the three bullies and become a hero? 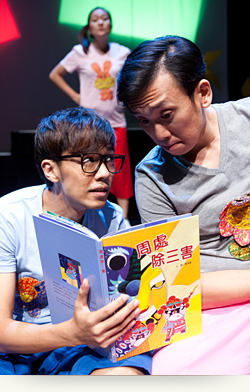 Go Bananas with Puppets in Curriculum

Go Bananas with Speech and Drama