Performed in English and/or Mime. 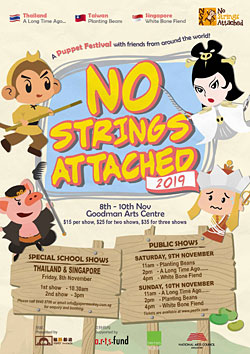 Paper Monkey Theatre is proud to present our yearly Puppetry Festival No Strings Attached, and it will be held on the 8 to 10 November 2019 at Goodman Arts Centre.

No Strings Attached is an annual mini puppetry festival hosted by Paper Monkey Theatre, and this year will be in its fourth year of running. Held in Singapore, it aims to be a puppetry festival that gathers reputable puppetry groups from across the world for exchange and interaction, and to perform for the local audiences. No Strings Attached also aims to promote puppetry to the public and allow local audiences to experience the various forms of puppetry.

No Strings Attached 2019 is supported by the National Arts Council and Arts Fund. 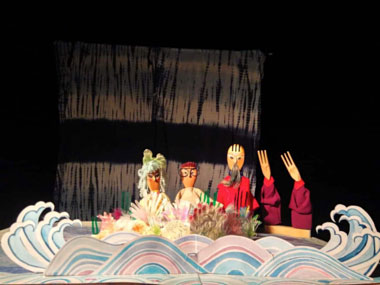 About the Performer: Founder of Puppet by Jae in 2017, Sirikarn Bunjongtad graduated with a major in theatre design from Srinakarinwirot University. She has been working as a puppeteer and puppet maker for 17 years and last year she received a grant from Asian Cultural Council (ACC) to travel to the US to study more about puppetry. She is also an artist in residency at Taiwan’s Lize Puppet Art Colony, and was also an artist in residency in South Korea during 2011. Previously she has won the Best Director during the World Puppet Carnival in 2012 and just last year she also received an award from the Theatre for Children and Youth during the Bangkok Theatre Festival. 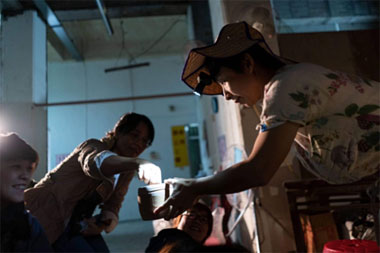 Synopsis: Amidst the fast-paced life of the modern people, discover the tranquillity in the darkness, pick up the beans and enter the dreams of childhood. Savour the tastes of life, which is like a river flowing with both joy and sadness.

Inspired by the miniature curio cabinet, utilising old stuff, plants, light and shadow, as well as a mini stage concept, added with an imagination filled with humour and quirkiness, the tale is stored in the treasure chest and the secret kept in the curio cabinet, culminating in an unique piece of puppetry work.

About the Performer: Xue Mei Hua is the founder for Bringing Puppets to your home, a project that brings puppetry as an art form into families, allowing them to appreciate puppetry up close. She is also a host in Chinese Television System (CTS), Taiwan for children’s programme, and currently a lecturer in University of Taipei, teaching Puppetry for children. 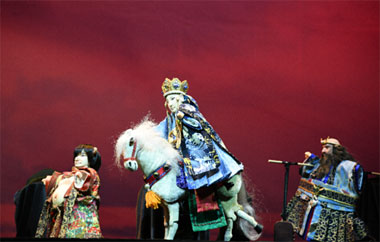 Synopsis: In this episode from the well-loved Chinese epic adventure, Journey to the West, Master Tang San Zang and his disciples encounter the White Bone Fiend in their travels. Intent on dining on Tang San Zang, the demoness tricks him into expelling Sun Wu Kong, the Monkey God from the group. Will she succeed or will Wu Kong save the day?

Inspired by the miniature curio cabinet, utilising old stuff, plants, light and shadow, as well as a mini stage concept, added with an imagination filled with humour and quirkiness, the tale is stored in the treasure chest and the secret kept in the curio cabinet, culminating in an unique piece of puppetry work.

About the Troupe: Nestled in the lush greenery of Goodman Arts Centre lies Paper Monkey Theatre, where we create theatre productions and workshops infused with puppetry for children and family entertainment, encouraging artistic development and enriching learning experiences. The company is formed in April 2008 and is helmed by well-known puppeteer/playwright Benjamin Ho, with a vision to create a platform of lasting, meaningful theatrical experiences for both children and adult in Asia.

At Treehouse : The Three Big Bullies