Suitable for ages 5 and up

Percussion by Cheryl Ong (from A Bigger Bang)

Performed in Chinese, no English subtitles

The show was great. It was interesting, with good humour, creativity and sincerity. Lots of efforts being made to ensure that a child can relate to the story

It was a great exposure of the Chinese culture and language for my child and I. We had a great time of discussing about the play for hours after the performance. 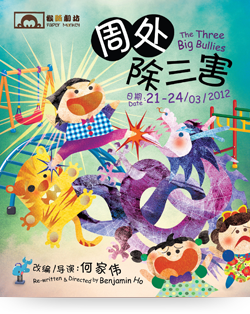 A long time ago, there once lived a tyrant named Zhou Chu, who was feared by many for his bad temper. Many years later this big bully appears again!

The bully is a little boy who has the arrogance and strength of a dragon, a howl louder than a lion, hotheaded and impatient as a tiger. The little boy always insists on having things his way. Every child at the playground is fearful of him. Along came two evils, Tiger and Dragon, who terrorised the playground. To be well liked, the little boy decides to chase the two evils away. Will he be able to defeat the two evils and become everyone’s hero?

Join us on a journey to slay tigers and dragons as we re-tell this Chinese Classic about bullying and its consequences, with a modern twist! Experience storytelling with drama, traditional hand puppets, rod puppets, shadow puppets by the Paper Monkey ensemble. Not to be missed!

Death of A Hero