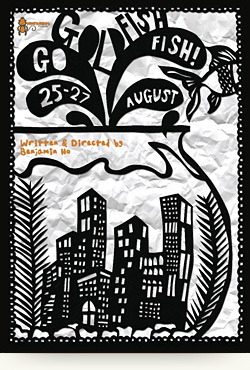 There was once an old lady who had a prized possession – a little goldfish.

One day, the old lady over heard that a “goldfish” could grow up to a few metres long. Thinking that the “goldfish” she heard was referring to the goldfish she had, the old lady started to pin high hopes and expectations for her goldfish that it too one day will grow to its fullest potential, so that she could be proud of it.

The old lady took great care and pride in providing for the goldfish; feeding it with the best, giving it the best living environment and went on to take extreme measures to make her goldfish grow. Little did the old lady realise that she had misheard and misunderstood; the “goldfish” she had heard was actually referring to a whale “鲸鱼” and not “金鱼” goldfish.

The little goldfish tried to explain to the old lady that it was not the “goldfish” that she thought it was, but the old lady could not understand what the goldfish was trying to say. Instead, the old lady grew impatient and frustrated when she saw that all her effort was going down the drain.

The little goldfish was pressured by the old lady with her constant pleas to grow bigger. Knowing that it would never be able to grow as big as what the old lady was hoping for, it decided to leave its fishbowl one day. The old lady finally came to understand what a fool she was to have misunderstood her goldfish and went in search for her goldfish to bring it back home.

Goldfish, GO FISH! – is a fun, quirky and thought-provoking puppetry performance by four puppeteers, which reflects the pressures and the expectations that children today are facing. The performance is delivered mainly visually with little texts through puppetry, music and movement.

Performed mainly in English with a mix of mandarin dialects & Malay